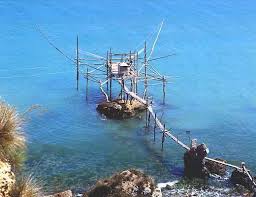 “The Coast of Trabocchi” is recognized as a World Heritage Site (UNESCO) is the stretch of Abruzzo coast between San Vito and Fossacesia. The overflow is a construction made of Aleppo pinewood with a direct platform on the sea anchored to the rock by large logs, from which stretched, suspended to a few meters from the water, two (or more) long arms, which support a huge tight-knit mesh known as the trap. The trabocchi would be an invention imported by the Phoenicians, the oldest documented existence dates back to the 18th century, when the fishermen of Abruzzo had to work to design a fishing technique that was not subject to the meteorological conditions of the area. In fact, trawls allow fishing without having to go by sea In 1889, Gabriele D’Annunzio rented a villa near San Vito Chietino, remaining struck by the trabocchi, in particular by the Turchino overflow, which he described in the novel The Triumph of Death (1894).